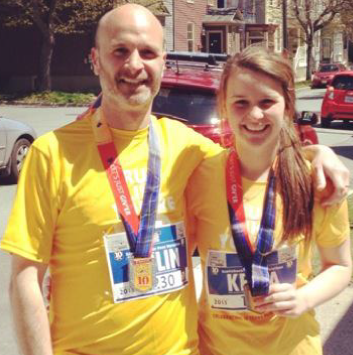 My name is Keira Brodie, I am currently finishing my fourth year at Western University. In October 2018, I was diagnosed with malignant melanoma. Before the diagnosis, I was planning on running my first full marathon in Vancouver in May 2019. I have always loved to run – it’s a great way to be alone with your thoughts, listen to your new favourite song repeatedly, and to justify that second bowl of pasta! I had always wanted to try running a marathon, so when my parents moved to British Columbia from Burlington, Ontario in the summer of 2018, I thought there was no better time to do it than in a new city.

That same summer, I noticed a strange-looking mole on my back. Initially, I didn’t think much of it, but after a few concerned comments from my parents and friends, I decided to have it looked at. I had the mole removed at the end of September and was told it was most likely a wart. This was great to hear, so I didn’t give it a second thought. Then in the middle of October I was told to come back into the doctor’s office and was informed that I had malignant melanoma. I was told I would need to undergo a wide local excision and sentinel lymph node biopsy surgery to find out if the cancer had spread.

There were so many things thrown at me at once, including hearing medical terms I had never even heard before. But waiting without further answers was the hardest part of this journey; my surgery was scheduled for November 21. My surgeon was great and my parents made the trip out to support me during my surgery, which I was so incredibly thankful for. I also had support from the best friends a girl could ask for, all the way from the east coast to right here in Ontario. The recovery from surgery was tough, but after a few days I was back to attending all my classes.

On December 13, I found out the cancer had spread to two lymph nodes on my right side and that I had stage 3 melanoma. I felt as though my entire life was going to change. But I was determined that it wouldn’t change for the worse. I had an incredible support system and was lucky enough to be given the greatest parents and family anyone could ask for. I was also blessed to have a best friend who has come to every appointment with me, as well as the occasional Wendy’s stops afterwards – because sometimes you write your own prescriptions with a side of fries.

I had a follow up PET scan after my diagnosis where they found a travelling lymph node on my left side that was also cancerous. My incredible surgeon managed to remove this as well. I was referred to the London Cancer Centre, and since I am BRAF-positive, I was eligible for a year-long clinical trial that would involve taking dabrafenib and trametinib daily. I started the trial in January and am incredibly grateful to be partaking in this clinical trial, as well as for all the medical staff I’ve encountered on this journey.

Throughout everything I still looked to running as an outlet, and I remained determined to try and run the marathon. I wanted to prove to myself that I could still do it, but I now had an even bigger reason to run: I could run to raise awareness for melanoma. Before my diagnosis I knew very little about melanoma and since I cannot sit still for very long, sun tanning was not exactly something I enjoyed.

This diagnosis took me by absolute surprise, as I am sure it does many others. If I could just open people’s eyes to the dangers of sun exposure or how to take preventative measures, that would be an accomplishment.

When I asked my oncologist if I would still be able to run the marathon this May, he said we would have to see how I was feeling after the first month of treatment. Throughout the good and bad days, as well as the side effects I have experienced over the first three months of treatment, I still can’t help but feel there is no better time to run this marathon.

I want to run this marathon not just for myself, but for my parents, family, friends, and everyone who has supported me and given me strength. I also want to run it for anyone who has been affected by melanoma and want to give them strength and hope as well. I want to thank the Melanoma Network of Canada for giving me the backing to spread this message and supporting me with this.