Melanoma is classified into different types. Classification is based on their colour, shape, location, and how they grow. 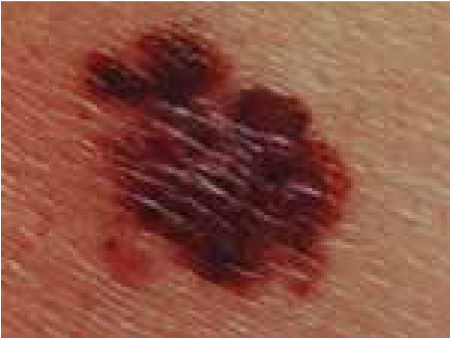 Superficial spreading melanoma usually looks like a dark brown or black stain spreading from an existing or a new mole. This type of melanoma is more commonly seen in areas of skin that have been exposed to UV light, especially areas of previous sunburn. It is the most common type, making up 70% of melanomas.

Superficial spreading melanoma tends to follow the ABCDE rules. In most situations the early changes are purely visual ones and it is the later stages that may result in symptoms (itching or bleeding). In addition to the skin surfaces, melanoma can also present in mucosal surfaces such as the mouth or genital area. 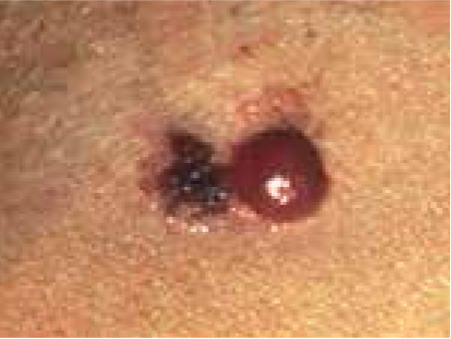 Nodular melanoma is a firm, domed bump. It grows quickly down through the epidermis into the dermis. Once there, it can metastasize, or spread to other parts of the body. Nodular melanoma makes up about 10% of all melanomas. Nodular melanoma is typically dark brown or black, may crust or ulcerate. As in all sub-types of melanoma, nodular melanoma can present without any colour or a pink, red or skin toned colour (amelanotic), especially in people with very fair complexions. 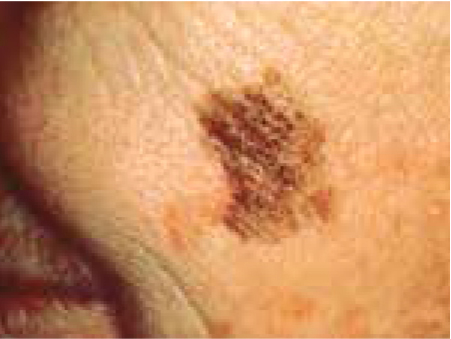 Lentigo maligna melanoma looks like a dark stain which may have looked initially like a large or irregular freckle. It has an uneven border and irregular colour. It is usually seen on the face or arms of middle aged and older people. It has a pattern of slow growth in the early stages when it is known as Lentigo Maligna. 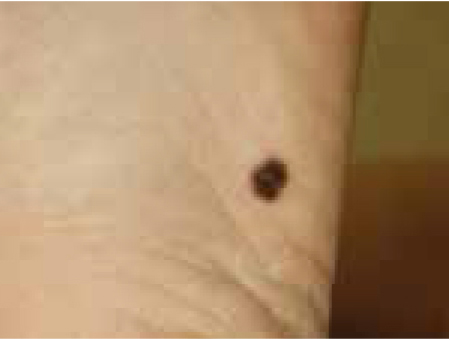 Desmoplastic Melanoma
Desmoplastic melanoma is a rare variant of melanoma, occurring on sun damaged skin, commonly in older individuals. It presents as a rounded or irregular slowly growing lump within the skin. It may be variable in colour and tends to be firm and scar-like. It may be mistaken for a cyst or keloid scar.

Uveal melanoma
Uveal melanoma is a cancer (melanoma) of the eye involving the iris, ciliary body, or choroid (collectively referred to as the uvea). Tumors arise from the pigment cells (melanocytes) that reside within the uvea giving color to the eye.  LEARN MORE ABOUT UVEAL