Skin cancer begins in the cells of your skin and has differing causes and varying degrees of malignancy. Your skin plays an important role in your body and is your largest organ. Skin is a protective layer that performs many tasks and defends the body against injury and infection, prevents the body from losing water, provides protection from heat, makes vitamin D and protects you from ultraviolet (UV) light damage. 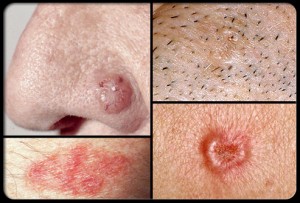 Basal cell carcinoma (BCC) is a cancer of the epidermis, which is the outermost layer of the skin. BCC usually presents as a pink or translucent nodule that typically appears on a sun-exposed area of skin, such as the face and neck. BCC is the most common type of skin cancer, making up about 75% of all non-melanoma skin cancers diagnosed. It is rare for BCC to spread to another part of the body, but it is possible to have more than one BCC at a time. Having one BCC increases your risk of getting another.

Most basal cell carcinomas can be removed with surgery if they are found early, however, the course of treatment for BCC depends on the size and location of the tumour. The patient’s age, medical history and health status also needs to be considered when deciding the course of treatment. Some of these treatment options are listed below. Discuss which treatment options are best for you with your doctor or specialist. 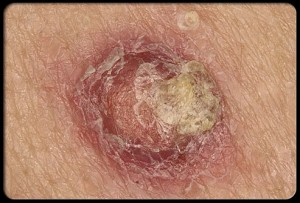 Causes
The leading cause of SCC is frequent sun exposure. People with fair skin, light hair, and blue, green, or gray eyes are at the highest risk. Patients, who have had tissue transplantations (and are on anti-rejection drugs), specifically for the kidney, liver or heart, are at a high risk of developing SCC. It can also spread to other parts of the body. On rare occasions, SCC appears on normal, healthy skin. Researchers believe this unknown origin is due to a genetic component.

Treatment Options
If lesions are untreated, they may continue to grow, causing damage to the surrounding tissue. This damage could cause the lesion to spread to other parts of the body. Treatment options for SCC include surgical abstraction, or radiation therapy.

Large, recurrent tumours or tumours located near key structures, such as the nose or eyes, are more complicated to treat and require Mohs surgery. This form of surgery has the highest rate of success in curing SCC, as it is a specialized form of surgery, which isolates and removes the tumour, saving the normal skin around.