I have melanoma. I have had the cancer for 7 years. It is a huge part of my life, which greatly impacts my day to day lifestyle. It follows me everywhere I go, and I think about the cancer and its eects on my life and family daily. No question, cancer is bad. And you really can’t do anything about your past, and why you, amongst the millions, were targeted for cancer. You have to move on, and start to battle the cancer with all the positive energy you can muster out of your body. A healthy body and mind will make all the dierence in your battle.

I was first diagnosed with melanoma cancer in 2009, in the left ear, Stage III. I had a part of my left earlobe removed, and then had procedures to get biopsies from the lymph nodes in my left shoulder, then thyroid to determine if the disease had metastasized to other parts of the body. My final surgery was to take a piece of my lung to determine if it had spread there. Fortunately the cancer was restricted to the ear. In 2013, following some progressive growth in my lungs, it was determined my cancer had indeed moved into my lungs, and I was Stage IV. Not a happy time.

I was then treated at the Royal Victoria Hospital in Montreal. I was eventually put on a BMS double blind trial for a new drug called Nivolumab with the other arm being Dacarbazine, the standard chemotherapy treatment. From November 2013 to March 2014, I was treated and there were no positive results. I had unfortunately been randomized to the Dacarbazine arm of the trial, and I was eventually released from the trial temporarily in March 2014.

In May 2014, I began treatment with Yervoy for a very short 4 treatment cycle, which would eventually allow me to be treated with Nivolumab. However, as I prepared to start Nivolumab in September, an MRI of my head revealed 2 tumors which would need to be removed before I could proceed with this new treatment. The tumors were removed from the right side of my head, and after a 3 night hospital stay, I felt quite good. That surgery was followed up with stereotactic radiation to remove any tumour fragments that may have been left behind.

In December 2014, I began to experience some post-surgery challenges: Gout in the left foot, and more importantly Deep Vein Thrombosis in the right leg, from my thigh to my ankle. I was also put on a drug called Fragmin to thin my blood. One week later I had a procedure to add an Inferior Vena Cava filter just below my lungs, as there were concerns that the clots were dangerous for my lungs and head.

In 2015, I was finally put on Nivolumab – 4 intravenous doses, followed by more whole brain radiation, a renal filter put into my vena cava, and finally, more head surgery to remove 2 tumors on the left side of my brain in July 2015. At this point in 2016 my head seems to have settled to a good place, and my lung situation has improved.

My Observations through Treatment

I currently have 4 unique doctors handling my treatment: an oncologist, a brain surgeon, a radiation oncologist, an internal medicine doctor. Each one has specialized knowledge in their core competency, but may not be as knowledgeable in the other areas. As you progress through the treatment process, your diagnosis can change. Make sure you’re aware and understand the changes and inform each of your doctors on all changes. Medication or procedures for one process can change the outcomes of another process, and they need to be aware.

The next biggest challenge is time. You’ve done the treatments, or had the surgery. You’ve started or completed the radiation. Now you must heal and wait, and it is a slow process. Unlike a wound, which is bandaged or casted and takes a specific time to recover, the cancer may be removed, may be slowed or may continue. It is important that you realize you are in it for the long haul, and recovery will take time. Stay positive, and prepare yourself for a long battle. Focus on how you will succeed in driving out your cancer. Exercise Stay physically healthy. Walk, ride a bike, do yoga, dance, just keep your body and mind in good shape. Every day is a new day, and you keep your mind and body busy to get stronger physically and mentally. This is really important, and somewhat ironic, as you need to be in good shape to tackle cancer. The stronger the body and mind, the stronger the fight.

I was the lead coordinator for the 2015 Montreal Strides for Melanoma Awareness walk. The organization of the walk kept me busy and focused, and was extremely important at keeping my head level. My last bit of advice: keep a positive attitude. Speak to positive friends, read, get informed on the internet, exercise, work, volunteer, do whatever you can to keep the mind positive. Your attitude will be a driving force to your success. 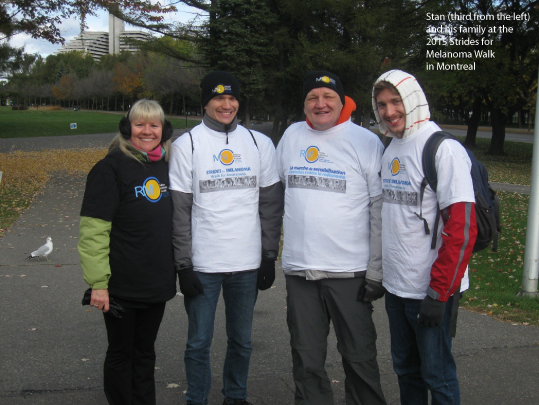