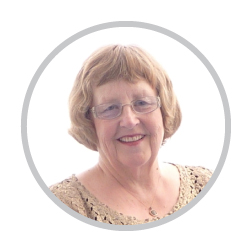 “My Journey with Uveal Melanoma”

My name is Joan. I am a retired teacher and professional librarian. I have reddish blonde hair, blue eyes, fair skin, and have been sunburned many, many times in my younger years. I am a uveal melanoma survivor. Although I am typical for my specific type of melanoma with respect to age, skin, hair, and eye colour, sun exposure is not a factor. Few people know about this rare form of melanoma; in fact, most of us who acquire it, do not even know of its existence until the day we are diagnosed. This is my story.

In the early fall of 2003, my optometrist saw something in the intra-nasal area of my left eye that looked strange. She could not identify it, so referred me to a Toronto Hospital. The attending ophthalmologist very quickly ascertained what he was looking at, then left the room and returned with a number of young residents. As soon as I saw the parade, I knew I was in trouble and that he was presenting them with a ‘teaching moment’. After they had all taken turns looking into my eye, the lead doctor told me, in a very clinical and cold fashion, that I had choroidal melanoma and that I would be referred to Princess Margaret Hospital for treatment. I readily admit to being totally numb with shock.

Before my next appointment, I started scouring the internet for any information that I could locate. I knew nobody else with this disease so quickly came to rely on online acquaintances, more experienced than I, who posted information and advice on an international listserv. I learned that choroidal melanoma is a type of uveal melanoma with an annual incidence of ~5 people/per million. It arises from melanocytes which are the cells that give your eye its colour. The two main treatment options at that time were brachytherapy radiation or enucleation. Slightly more than 50% of patients have their eye treated and go on with their lives, never to have the melanoma return. For the other 50%, the future is not so bright. Their melanoma metastasizes, usually to the liver. Nobody knew why at that time, but today they do. Nevertheless, today’s treatments are very experimental and there is currently no known cure. Uveal melanoma is called an orphan disease because it is so rare. We refer to ourselves as ‘orphan OMers’, but it is no joke. Metastatic uveal melanoma is a killer!!

At Princess Margaret Hospital my eye was examined thoroughly so that the doctors could decide whether to radiate the tumour or to remove my eye. The clinic’s director felt that he could save it, so I underwent I-25 brachytherapy in February 2004. For a week I lived with a radioactive implant in my eye…definitely an uncomfortable experience…but a necessary one. After the implant was removed, my eye began to heal. Miraculously, I eventually regained almost all of my sight, but about two years later, I became aware that I could not see colours. Soon I could see nothing but grey shadows. I was suffering from radiation-induced complications. The resultant swelling had damaged my optic nerve, and there was nothing that could be done. So, I learned to live with one functioning eye which actually prepared me for another shock. Living with monocular vision can be incredibly frustrating and tiresome. It can also be rather hilarious because we have no depth perception so we pour liquids onto the counter instead of into containers and we constantly run into people on our blind side, apologizing profusely.

For the first year, I was monitored quarterly to ensure that the tumour was shrinking slowly as it was supposed to do. Soon I only needed to go to Princess Margaret twice per year, then after 6 years with no problems, I was downgraded to an annual appointment. After 10 years, I honestly believed that I was just a statistic, going for checkups so that the hospital could develop a reliable database of patients who had been successfully treated. How wrong I was!!

My annual appointment in 2014 revealed that I was a ‘rare’ kind of statistic indeed. My tumour had cloned itself and broken out once again. This happens in fewer than 5 % of cases. There was no choice but to remove my eye as quickly as possible. I was booked for surgery 2 weeks after this second diagnosis. Once again I went into research mode. Much had changed in the intervening ten years. Treatments that have shown success for skin melanoma patients are

being tried on uveal melanoma patients with varying degrees of success. There are new drugs, new therapies, and new tests. The biggest breakthrough is that they have identified the major culprit that causes metastatic spread. It is known as monosomy 3, a defective arm of chromosome 3 on the tumour itself. I contacted two centres in USA which could do this testing. Then, less than 1 week before my surgery, I discovered that a Canadian company, Impact Genetics, had just received government approval for its Uveal Melanoma prognostic test. I fought to have that test and, literally at the last minute, medical personnel at 4 hospitals and Impact Genetics itself, made it happen. OHIP does not yet cover the cost, so I needed to pay for it myself… money well spent.

I wish I could say that the dreaded defective gene wasn’t present in my tumour, but I can’t. I now know that I will very likely develop metastatic uveal melanoma in the coming years. However, I consider myself fortunate. My provincial health system will pay for regular MRI and CT scans because I am now considered a ‘high risk’ patient. A very talented ocularist has created a prosthetic eye for me that looks absolutely real. It even moves! I feel like royalty because I am not only under the care of my family physician and an ocular oncologist, but also a medical oncologist, who is a Canadian melanoma specialist, willing to take us ‘high risk OMers’ under his wing.

I now live each day to the fullest and try not to think negative thoughts about a future event that I cannot control. I firmly believe that NOBODY should have to take the cancer journey alone, especially someone with a rare cancer where there are very few fellow patients to share similar stories. That is one of the reasons why I have applied to be a peer support person for the Melanoma Network of Canada and will be honoured, when asked, to share my time and experiences, and the knowledge I have acquired, with other melanoma patients who need help to stay positive on this frightening journey.

Joan is a contributor to our Uveal Melanoma Patient Forum. An online community for melanoma patients. If you have a question please click on the link below
or call 1-877-560-8035 x 105 for support. 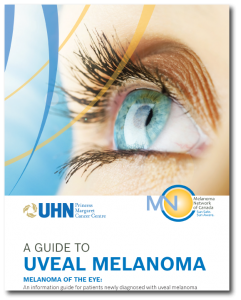 For More information on Uveal Melanoma

Visit our MNC Publications page for a pdf booklet with information for newly diagnosed patients with Uveal Melanoma. It was written in collaboration with Princess Margaret Hospital and is based on research and current best practices.