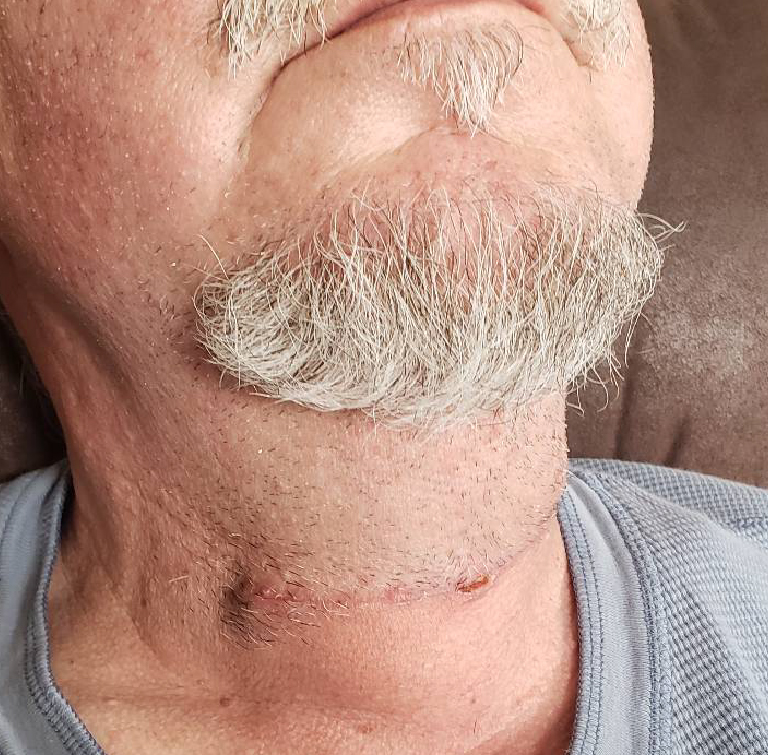 On February 13 of 2020, life got just a little bit more complicated. We were already starting to see the changes we were going to have to make in our daily routine to adjust to our current reality around the COVID-19 pandemic. However, when your Doctor leaves a message for you to make an appointment things don’t feel quite the same.

It turned out that the mole I had removed twice because I kept shaving it off every day came back from the lab the second time as a stage two melanoma.  I am used to health challenges throughout out my life but that denouncement really knocked me for a loop.

In 1991, I was involved in a near fatal MVA where I received three closed skull brain injuries, three spinal fractures, fractures to most of my ribs on the left hand side, my pelvis fractured in four directions, a bruised heart and punctured lung… along with a few other minor physical intrusions. I fought long and hard to recover from those damages and to get back to near normal functioning   Five years ago I had a motorcycle accident that left me with a left tibia/fibia fracture in twelve places, more fractured ribs and my left arm torn nearly off. Again, the rehabilitation was extensive but not total. However, I have never had to deal personally with the big “C”.

It may have not been all that romantic , but I chose Valentine’s Day to tell my wife. She is a maternity nurse at our local hospital and she was just transitioning to her four days off and I thought that would be best. She took it reasonably well considering everything else that was unfolding in Canada and around our extended family. She is such a positive person and she is my number one supporter.

The dermatologist called the next day and my first appointment was set up very quickly.  This was both concerning and reassuring all at the same time. Dr. Jenkins is a direct and very professional man who told me that he was making the referral to the oncologist surgeon straight away and gave me a list of tests and records that I need to get organized and complete as soon as possible.  I know that melanoma is one of the cancers that offers better odds of survival if dealt with as quickly as possible so I got on it right away. As I was already a seasoned, self-advocate I worked my magic and had all of the requirements completed by the beginning of the weekend; two days total. Then the waiting began.

During the next long and drawn out days I connected with the Melanoma Network of Canada and the very helpful Mary Z. She is almost solely responsible for me maintaining any level of calmness and functionality during the seemingly endless weeks it took for the surgeon to get an appointment for excision of the tumor and a complicated lymph node biopsy.  There were a few complications that made the wait longer.

The first was the ever-expanding COVID-19 pandemic.  The health regions in British Columbia were trying to prepare for the expected influx of virus carriers. The health regions were cancelling or delaying all nonessential surgical procedures trying to  free up beds. All immediate surgeries were going to have to be completed as quickly as possible. Yet I waited and waited, becoming more and more concerned about the delay and the possible determent to my long-term health outlook.  Finally, the surgeons office called and informed me of my consultation…in two days .

You have to also be aware that I live in Campbell River, which is near the northern tip of Vancouver Island.  Getting to the surgeons office involves a two-hour drive to the ferry terminal in Nanaimo usually very early in the morning.  Then, after the two hour ferry trip to west Vancouver there is the congested drive through Vancouver to the office in the top end of the city. The consultation took under thirty minutes and then we had to do the journey in reverse. Luckily, because of the pandemic travel restrictions it was fairly easy to complete the journey.

The surgeon was awesome but she was unable to give me a date for my surgery, as the medical center at UBC had not yet been able to adjust their timetables and bookings in relation to the many ever-changing circumstances around the blossoming pandemic safety measures. The best she could tell me is that we were hopefully looking at the early weeks of April; a full two months after my diagnosis. She reminded me that I needed to look after myself and not get infected by the coronavirus.

In way of background for my work situation and the possibility of infection I should tell you what I do. I had been the Coordinator of the Campbell River Sobering Center for Vancouver Island Mental health Society for approximately two and a half years at that point. We deal with some of the most disenfranchised people on Vancouver Island.  They have no way of social distancing or self-isolation.  We established quarantine level cleaning and disinfection protocols, with distancing requirements laid out on the flooring in duct tape and prepared for any possible contamination scenarios. Still, I could not be unconcerned with my possibly comprised immune system.

After a few weeks of no news and ever increasing levels of stress, I did finally receive confirmation of a surgery date; again in just two short days. There were many preparations to be made for both of us to get three days off, to find someone to look after our animals, and to arrange accommodation booking the surgery. We got it done thanks to accommodating employers and supportive family and friends, but it was a challenge.

The ferries were near empty and the roads between Campbell River and Vancouver were eerily empty. The city was the quietest I had ever seen in in my lifetime those people that were about with faces masked and eyes averted, swerved and changed direction constantly in order to avoid us dragging our suitcase from the car to the hotel lobby. It was so surreal. Because there were no restaurant-taking guests, we availed ourselves to the new technology of food delivery couriers. What a great and timely service option.

The next day we were up early to met with the technician who was in charge of injecting the nuclear isotope for the tracking of the possibility involved lymphatic system and then straight to the medical center to get prepped for the surgery itself. A gowned, masked and gloved nurse sitting next to a security guard met us at the door. We were told to disinfect our hands and then find a seat to wait to be called into admitting. When that nurse came down my wife was told that was as far as she could accompany me and that they would call her just before I was discharged so that she could come and collect me. As with any surgery and possible complications we were parted with both of us mired in apprehension.

I guess the surgery went well… I woke up. Neither my wife nor I were told anything except that we were to expect a follow up telephone consultation in two weeks time. I was impressed with how I felt after the operation and how the incision was healing until eight days into the recovery.  I woke up in the morning of that day with incision swollen and my neck twice it’s normal size. My wife read the care instructions that we received from the hospital and was amused with the directions that if there was bleeding she was to “apply firm pressure for twenty five minutes.” Obviously, these directions were generic and not meant for surgeries that involved the throat. Again, connecting with Mary at the Melanoma Network of Canada helped to calm me down, as this was a common result of this type of surgery. Thank goodness for her support.

Finally, after the frustration of waiting the two weeks I was given the all clear and reassurance that the cancer had not managed to make it’s way into my sentinel nodes. Whew* I thought to myself, I am glad this is over. But of course, as it is with all cancers, future diligence is mandatory.

For the last two weeks my wife and I have been fretting over and watching. a new mole on my right cheek. It seems to fit the ABCDE’S of melanomas.  Today, April 29th, I had made an appointment with my GP to have it removed and sent for testing. Unfortunately, when I woke up I was feeling under the weather and experiencing symptoms that could indicate I have contracted COVID-19. So I cancelled that appointment, applied for testing, and voluntarily isolated in our camping trailer in the driveway. Two days of waiting under the awning to avoid the sun I am trying not to worry about how the next chapter of this adventure will play out.