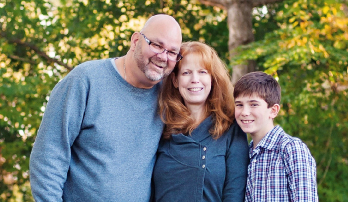 Sheer determination can do a lot to power us forward. Recently I had an opportunity to speak with Julie McGuffin from Dorchester, Ont, about her year of adjuvant treatment with targeted therapy for stage IIIC melanoma. At age 45, with a loving husband, a young son, a busy life and starting a new job, a melanoma diagnosis was not on the radar. A special first-ever family trip was planned to Ireland.

But then, there was this mole. Julie had noticed it on the back of her upper arm. It was bothersome and bleeding – just rubbing a towel over it would make it bleed. A fair-skinned, red-headed young woman with a bleeding mole – we know that to be a tell-tale sign of a potential problem. She was worried and after a frustrating series of doctor appointments, Julie finally met with a plastic surgeon who removed the concerning mole and sent it off for biopsy. Julie’s world was about to change.

When the biopsy confirmed melanoma, Julie was thrust into the new world of doctor’s appointments, tests and scans. Everything was moving so quickly. A sentinel node biopsy and wide local excision surgery was scheduled. It was a blur. At first, she didn’t think it was serious, so she went to her first appointment on her own as she thought it would be quick. The appointment went over an hour, and she was a mess. She remembers asking the resident medical doctor, “Is this going to kill me?” The intern couldn’t say. The reality was setting in.

The sentinel node came back positive for melanoma, with some additional areas of concern. There was a concerning spot found on her lung, but the doctors advised her that it was probably nothing, just a residual effect from pneumonia. It was then decided that they would watch the spot through additional scans.

The discussion then turned to the need for a full axiliary node dissection. Julie said, “the toughest part of the journey is the hurt or pain and worry for family and friends – having to tell them. I wanted to spare my son until we really knew what we were dealing with. We talked with the school principal who had been through cancer and sought her advice. We told my son just before our trip to Ireland – it gave us ten full days to be normal, time to process the information with a bit of distraction. I wanted my son to see that I was still me, still able to have fun and give him our full attention and support as he dealt with the news.”

Given some unique characteristics of her positive sentinel node, a full axiliary node dissection was performed. The results came back that of 29 nodes removed, 16 of them had cancer. “I was devastated with the information about the nodes – I couldn’t feel them, so it didn’t feel like I was sick. How could I have this much cancer? I didn’t want to know a lot of information in the beginning because it was too much for me.” The risk for recurrence and spread of the disease was high. However, the silver lining was that new adjuvant therapy access had just been made available. Timing was everything. Had it been a year before, Julie may not have had any further treatment options other than monitoring.

In July 2018, Julie started daily oral targeted therapy. Treatment began on Friday and she started her new job on the Monday. She wanted life to be as normal as possible. Only her new boss knew about her situation.

Did I mention that Julie has dealt with a lifetime of chronic disease as well? She also lives with rheumatoid arthritis (RA). Worrying about the side effects of her targeted therapy combined with her RA drugs, she decided to come off of her RA drugs for the entire year of treatment. She managed with strong pain medications and resting when she needed. For an entire year she dealt with a ramped up immune system, which caused frequent fevers and flared up the rheumatoid arthritis every four or five weeks. She put up with rashes on her legs and arms just before the high fevers. The fevers progressed and got worse the longer she was on therapy: One to two days in the first couple of months; then three to four days a month for a few months; and up to five or six days a month towards the end of the year. At one point she had a fever of 102.5 for seven straight days. The fever would build all day and last through the night. Yet she got up and made it to work every day, only taking the last two weeks off at the end of therapy out of necessity.

When asked how she coped not only with the physical effects, but also with the emotional impact of her diagnosis, Julie said, “You are dealing with life. Wouldn’t it be nice if all you had to deal with is cancer? Job losses, sick kids, school, outside activities, the house…life doesn’t stop. It was a challenge physically and emotionally. Travelling to work in the dead of winter with a fever; running around for my son who plays competitive hockey and AAA baseball. He didn’t miss a thing and I was determined he would not be impacted. I was fatigued beyond belief, but I just wanted to keep things normal.”

However, the emotional stress was challenging. She felt completely alone, anxious and isolated. Unaware that the hospital offered counselling services, Julie waited months to seek help. She reached out to us at the Melanoma Network. “I called and I was a blubbering mess. I had no one else to talk to. The diagnosis was so overwhelming and so much information, I couldn’t process it. It was the phone call I made to MNC and the staff member I spoke to was a lifeline. What I got from calling was hope. I felt that there was a chance to survive this.”

After some initial coaching, Julie was put in touch with one of MNC’s trained volunteer peers who had been through a similar diagnosis. “I just needed someone to talk to that had been in my shoes – to tell me that it was going to be ok. Beth, my peer support, was that for me. I felt that I had a better perspective and felt that there was hope. It was a lifesaver through the last year. We vented to each other and now it is so much better – because if it comes back, I hope I won’t have the devastation and fear that I had the first time. To see her still doing well, even through her treatment, gives me a sense of optimism.”

Peer support was a lifeline for Julie when she needed it. “When you are in the middle of it and in a whirl, then having someone you can talk to that can articulate back to you exactly how you feel is so amazing. Your family and friends are wonderful and caring, but it is just they don’t know how you feel. It takes a layer of the stress off you to be able to vent and talk with another that has been through a similar journey. You are dealing with the devastation of the disease and having to educate those around you. With a peer, you don’t have to do that. They get it. It relieves the stress and allows you to live life in a better way. Being able to see firsthand that people do live with the disease provided a much-needed sense of hope. Knowing that you are not alone in this is so important. I am now very aware of my time and the value of life. It changes your outlook and how you feel, how you take care of yourself. It changes the conversations I have. I have a second chance also at my parenting – about what is important and how you take care of yourself.”

HOW TO REACH US