I am Registered Nurse and have worked in the surgical program most of my career as well as five years in community nursing. I had contact with many cancer patients and was often involved in their treatment and care at various stages of the disease.

In February 2011, I saw a dermatologist for a mole on my abdomen that had changed in appearance over the last few weeks; a mole I had all my life and was always irregular in shape. He told me it was probably a melanoma. I suspected as much but hoped it wasn’t.

That same day I saw a plastic surgeon. She removed the mole then and there and said it would take a week to get the results. The following Monday she told me I definitely had malignant melanoma. It took a little time for that to sink in. The doctor also told me the margins weren’t clear enough and that I needed further surgery. At this point I went into that numb, shocked state that comes with this sort of news. On April 14/11 I had the second surgery at Princess Margaret as well as the sentinel node biopsy. When I saw the Surgeon two weeks later he told me I had stage 4 melanoma, but that the sentinel nodes were clear. I couldn’t believe my ears!!! That was a huge positive. I cried and I laughed all at the same time. It was the best news.

I had lots of support from family and friends. Sometimes people would say to me that it was a good thing I was a nurse because I must know all about it. I knew about the physical part but the head stuff was all new to me. I had no idea just how devastating it is to hear “you’ve got cancer”. I found this part much more difficult to deal with than the physical. Not long after, I saw the oncologist and we had a discussion about Interferon and I decided I wouldn’t take it because the statistics just weren’t good enough for me.

In May I started to feel depressed and couldn’t figure out why because I was happy about what I’d heard. The question that kept coming up was, ’Why did they have to remove so much of my tummy, did they get it all?’ It also made look at the possibility of death. I went to Wellspring and was introduced to my peer support, Annette Cyr, who was a great help to me since this had been her journey as well. I also enrolled in the Healing Journey program, offered at Wellspring, to help me cope with my diagnosis. I had many conversations with family and friends, one of whom had also been through a cancer ordeal of her own. Around the middle of August, I just wanted to feel better so I took another look at what was bothering me. Most of it was stuff I could do nothing about. I felt well and thought that maybe I’m cured. But if I’m wrong, then it is what it is and I’ll have to deal with it whenever. For now this is my life and I will live it to the best of my ability. I have a good family and friends who love me as well as two beautiful grandsons who are the light of my life. I have tried to live more in the moment and to appreciate my many blessings. Prayer has been a big part of my life and continues to be.

Here’s the analogy that I use to help people understand how I felt. When I first got diagnosed and up to the surgery, I tried not to think about all the possibilities ahead of me. It was like I was walking around a hole and keeping my eye on it so I wouldn’t fall in. After I got the news that the sentinel nodes were clear, all the stuff I had managed to keep at bay now showed up; I had taken my eyes off the hole and fell in. The journey out of the hole took some time but I made it and haven’t been near the hole since. I still have difficult moments and with the support system I have, I’ve been able to cope. So far, I am still doing well.

Back to Patient Stories 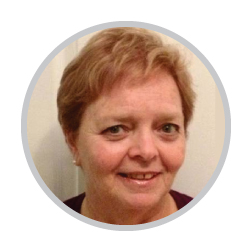