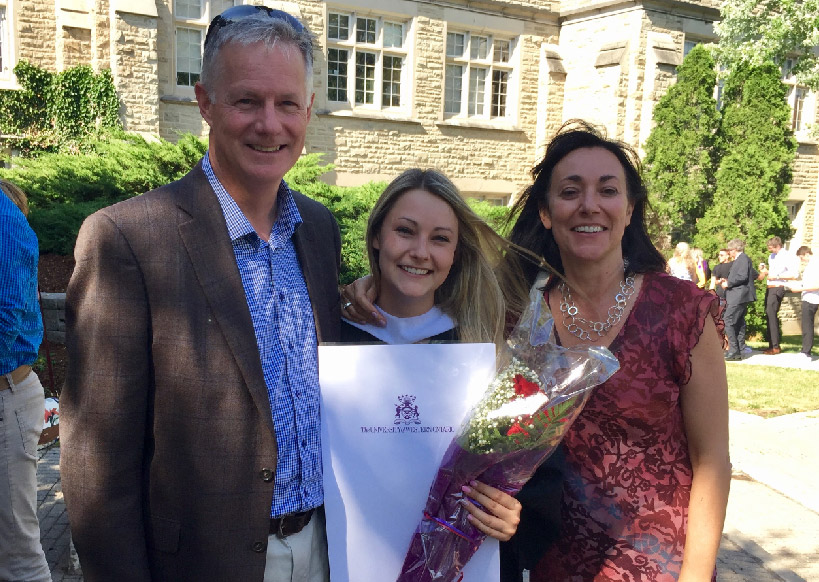 Further Education Led Me to Discover that I Had Melanoma

My name is Emma Newman and I was diagnosed with malignant melanoma when I was 23 years old. In June 2018, I graduated from Western University with a degree in Health Sciences and Psychology. During my time at Western I was very involved in extracurricular activities. I was a first responder on the Student Emergency Response Team (SERT), a member of the University’s Mental Health Advisory Board, an active member of Kappa Alpha Theta Sorority, as well as a team member of a medical service project.

I began experiencing a range of debilitating symptoms including chronic pain in my lower abdomen, pelvis, hips and legs. This led me to see doctors in countless specialities including gastroenterology, nephrology, endocrinology, internal medicine, gynecology, pain specialists, and the list went on. Through these specialists, I was given many possible diagnoses but nothing that explained all of my symptoms and more notably, nothing that alleviated my chronic pain. Each specialist would decide whatever was wrong with me did not pertain to their area of speciality and would refer me to the next doctor. All day every day, I was in pain, but no one seemed to be able to fully understand or evaluate my symptoms and thus left me with no accurate diagnosis. I was forced to limit my involvement in extracurriculars due to the pain and the frequency of doctor appointments. Eventually I was misdiagnosed with endometriosis and put on Lupron Depot Injections which puts your body into artificial menopause. I was told I would get worse before I would get better, but the pain should start subsiding within a month. A month went by and I felt worse than I did prior to the medication. When I went for my follow up appointment, they determine if it was endometriosis I would have felt better by now. Since I didn’t, they discharged me as a patient, leaving me more ill than before and with no medical plan of action.

By the time I graduated, I was too unwell to work so I decided to look for postgraduate programs I could do online from home. I enrolled in Pathophysiology and Epidemiology at McMaster University, which was offered completely online. I was hopeful that this further education might give me some direction as to what was making me so unwell. During my pathophysiology course, I was learning about spinal nerves and related conditions. This is when I made a connection and began to realize my symptoms were quite similar. I researched many rare cases including melanoma impacting spinal nerves and what I noticed was many of these patients had symptoms remarkably similar to mine.

I had never completed a skin examination before but decided I should examine my back to see if there were any visible abnormalities. I noticed a black, irregular shaped mole that was bleeding very close to my spine. Having learnt the warning signs of skin cancer, I was able identify the suspicious mole and determined I should have it checked by the doctor. My family doctor sent me to a dermatologist who did a biopsy immediately. I asked if the mole could be affecting the spinal nerves thus causing my chronic pain, but the doctor said no. After suffering from chronic pain every day for so long I was desperately hoping the mole was causing my pain. One month later the biopsy results came back as malignant melanoma. One week later, I had an appointment with a plastic surgeon and the next day I was in surgery. After the surgery I stood up and other than the large incision down the middle of my back, I felt great. I walked into the waiting room where I saw my mom anxiously waiting for me; I gave her a big smile and said the pain is gone.

I waited for the surgical pathology to come back indicating clear margins. I was confident that would be the case. When the pathology came back clear, my doctor determined there was no need for a lymph node biopsy or any scans. After a number of long years, I was finally pain free. Once recovered from the surgery, I returned to the doctor who diagnosed me with endometriosis who also happens to be a nerve specialist. He concluded the most likely explanation is the melanoma was pressing on spinal nerves T12, L1 & L2 causing my pain and other symptoms; however, the relationship between my chronic pain and melanoma still remains a mystery for which I will probably never get confirmation. For now, I am just thankful to be cancer and pain free.

Once I recovered physically, I was determined to turn my negative situation into a positive one, so I began volunteering. Volunteering with The Melanoma Network of Canada allowed me to connect with other patients who understood what it was like to battle melanoma and to provide hope and support for other patients. I successfully graduated from McMaster University, and am set to start a Master of Public Health at City University of London this September. In closing, I wish to thank everyone at the Melanoma Network of Canada for providing me the opportunity to share my story and for helping play a pivotal role in my recovery.