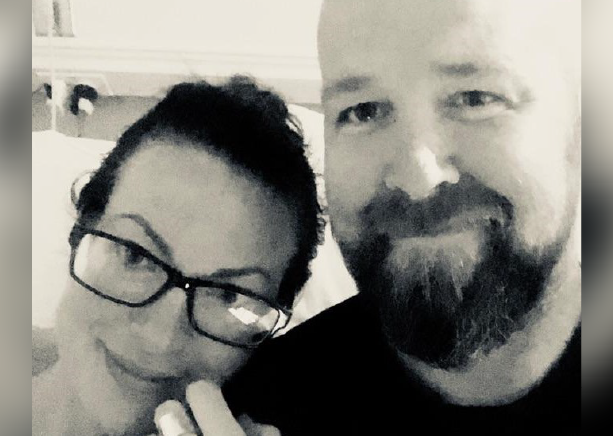 Melanoma, My Invisible Enemy for 11 years

“The enemy is never more unnerving than when he’s invisible.” – K.J Parker

No words could be more true! Cancer has been my invisible enemy for 11 years. My name is Brandon Smith and I have Stage 4 metastatic melanoma.

I was first introduced to cancer in 2010 when I had a mole removed. It came back as Stage 4 Melanoma. Like most people, I didn’t know how to process it. There I was, a young 30 year old man, but I learnt that cancer doesn’t care who you are or how old you are.

I don’t know what day it was, but I imagine it was like any other day, only months before my 31st birthday. I had a jujube-sized mole on the back of my neck that I never paid any attention to until the day I accidentally ripped it open when my lanyard ID badge snagged on something. Obviously, it started bleeding, so I used the array of bandages in my work van to cover it up. I kept putting large bandages on the mole to try and control the bleeding but for days it continued to bleed through. It wasn’t until I went to the local clinic to refill my asthma prescription that I mentioned the mole that had been bothering me and I just wanted to get rid of it.

I didn’t know at the time how important that clinic visit was but it in fact changed my life forever. The doctor on duty made a call for me to see a dermatologist. A month later, I was there at the clinic. In no time, the laser was fired up and that annoying mole was gone. I paid my bill and went on my way. However, within a few days, I received a call from Dr. Radin’s office. The nurse told me to come in right away, with a worried tone to her voice. I think it only took me about 5 minutes to realize that doctors’ offices only call when something is wrong, and my mind immediately started to race. Suddenly, fear consumed me. I raced down the 401 to get to the office. I’ll never forget the moment he walked into the room and told me the “Brandon, I’m sorry but your biopsy came back positive for melanoma”. He gave me some brochures and told me not to worry, that they would set me up with a plastic surgeon who would remove the cancer. I can’t explain the feelings I was having because it felt like everything was going so fast. Within a week I was sitting in the plastic surgeon’s office for surgery on the back of my neck. Between going to the appointment alone, trying to understand what the doctors were telling me, and the pain of the radiation to the back of my neck, it was a lot to process.

My lymph node diagnosis came back negative and from 2010-2014, after the surgery on the back of my neck, there were no signs of the cancer spreading to other parts of my body. I went back to living my life. This period of my life was particularly great! I got married in 2011, and I became a father to twins who were fighters in their own right, born at just 25 weeks and weighing only 1 pound 11 ounces.

Now my girls are 9 years old. They are my inspiration as I fight my biggest battle yet.

What’s worse than being told you have cancer? Being told you have cancer for a second time and that it has now spread throughout your body. Why me? Why 8 years later? Cancer feels like it has unfinished business with me. Now 39, I had to stop working. I was an alcoholic, on medication for anxiety and depression, and I was now a single father after my divorce. In the hospital when I was told my cancer came back I sat there for a minute and reflected. I then stood up, took a deep breath, and said to myself, “Okay! I have to do what I have to do.” At that moment, I told myself there isn’t anything I couldn’t do. I had beaten cancer before and I was going to beat it again.

I wanted to make sure I left no stone unturned when exploring treatment, and I even went to Toronto to see about a clinical trial. I ended up finding out that they were doing the same treatment in my home town of Windsor. The treatment I received was two different immunotherapy drugs at the same time, Ipilimumab and Nivolumab, or as they’re otherwise known Yervoy + Opdivo. Ipilimumab was not a cheap drug, and I was lucky that I received it under a compassion plan. At the time, only 30% of people were able to tolerate the side effects after 3 treatments, but I made it through all 4 sessions. Visibly seeing the lump on my head getting smaller over time, as well as staying mentally strong for myself and my kids, and my new wife Sarah who gave me the strength to continue treatment. The side effects were no joke, with dehydration from diarrhea, thrust in the mouth, weight loss from the inability to eat and low potassium to name a few; but I knew I had to make it through for my family.

I didn’t initially realize the severity of stage 4 melanoma, until years later after hearing many stories from those who have lost loved ones and the importance of getting your moles checked. My body is covered with freckles and I grew up in the 80’s when sunscreen and skin safety wasn’t a priority. I remember every time it was sunny out my mother would slather the tanning oil all over her body and lay out back on the lounge chair for hours. My lack of understanding and education on the importance of sunscreen led to many years of not using it. Vacations, working outside, outdoor concerts, family reunions, and coaching baseball, all contributed to my stage 4 melanoma.

Today I’m still here receiving Nivolumab every 2 weeks. My cancer is part of my life, but it is not my life. My family and friends are the best weapon I have in fighting this invisible enemy, and I thank god for them every day, especially my wife. I would not be where I am today without her help.

You Are Not Alone

A melanoma diagnosis can be overwhelming. But you don’t have to face the challenges alone. The Melanoma Network of Canada offers a wide variety of free services to support patients, families and caregivers through every step of their journey.