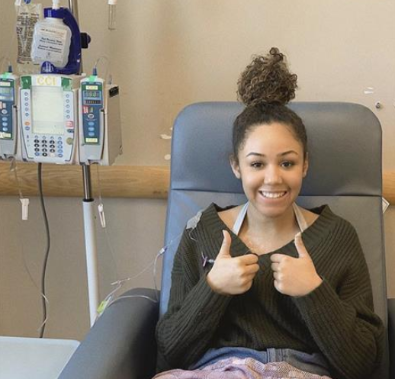 My melanoma story begins when I was born with a congenital Nevus birthmark covering most of my left breast. Growing up I never thought much about it other than my appointments with plastic surgeons and dermatologists every 3 months. Although, from a young age I did know cancer was a possibility for me, but I never fully understood what that meant. As I got older, my birthmark grew with my body into a fist size mark on my left breast.

Things took a sudden turn for the worst in my first year of university when my birthmark started bleeding. At first, I didn’t think much of it, as the birthmark has always been very sensitive to scratches, but when after over a month of it never fully healing I got worried and made an appointment with my dermatologist. When I saw him he didn’t seem too worried but biopsied the area anyway. Two weeks later I got a call saying the biopsy came back irregular, and they weren’t sure if it was cancer or just due to trauma from the bleeding. So, I went back and got a bigger biopsy done, another two weeks later went to see him again and was told I had melanoma. (This all happened during finals, so the stress was real). Less than a week later, I was meeting with a surgeon to discuss my surgery that involved removing my entire nipple as well as a lymph node biopsy from my armpit. I remember everything moving so fast. The next few weeks were a blur. I had surgery, and soon after was told that the cancer had spread to 3 out of the 5 lymph nodes they biopsied, which meant I was stage 3.

I started on nivolumab immunotherapy, about a month after, and was scheduled every 2 weeks for a year. There have been hiccups along the way, a few treatments before my half waypoint, my liver enzyme spiked so high I was taken off treatment for almost 2 months. It was up in the air whether it was safe for me to go back on, but we took a leap of faith once my liver enzymes settled back to normal, and since then my liver has been stable. As of right now I have two treatments left and I finish on September 14th!

I think one of the most interesting parts about my cancer journey is being a young adult. Being diagnosed at 18 means that as all my friends got to gradually transition into adulthood, I instead was just trying to survive. Being legally an adult but emotionally and maturity wise still a teenager, I think the transition has been and still is twice as confusing for me. In some aspects, I was thrust into having a certain amount of strength and maturity within me. However, on the other end I’ve missed out on many of the basic freedoms that my friends have.

“Being diagnosed at 18 means that as all my friends got to gradually transition into adulthood, I instead was just trying to survive.”

My first summer being an adult while all my friends got to enjoy going out, and making memories I was stuck trying to grasp the fact that the next year of my life would be devoted to battling cancer. This summer due to COVID-19, I can’t see my friends, I am again stuck on the outside looking in to a life that I know I will never have.  I’ve lost friends who can’t deal with the thought of me having cancer, and I can’t relate to most people my age because my perspective on life is so different from the average 19 year old. I know that for the rest of my life when I look back onto what should be the best years of my life my mind will always go to cancer. I know that from this point on, even when I no longer have cancer, it will affect me throughout my life. My life will never go back to the way it was before I was diagnosed; there will be a new normal, a new me. A strong and a beautiful cancer survivor.

If you would like to share your skin cancer journey with our community, we would love to hear from you. Please email Patient Care Specialist B.A, SSW, RSSW,  mzawadzki@melanomanetwork.ca or call 1.877.560.8035