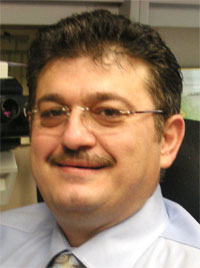 Dr. Ghazarian obtained his MB.Ch.B. degree from College of Medicine, University of Baghdad, in 1981.  He obtained his PhD degree in Cancer Research in the department of Laboratory Medicine and Molecular Pathology at the University of Toronto.  He entered the Residency Program in Anatomical Pathology at the same university and acquired his FRCPC in 1997.  Dr. Ghazarian then joined the Department of Dermatology/Dermatopathology Fellowship Program, Faculty of Medicine, University of Toronto.  Thereafter, he became an active staff member at University Health Network (UHN), and currently holds the positions of Director of Dermatopathology and Director of Education at UHN.  Dr. Ghazarian has won many teaching awards such as the Wightman-Berris Academy Award in 2002/2003.  He participates in national and international conferences and congresses.  Dr. Ghazarian holds membership of many societies, such as Canadian Association of Pathologists, United States and Canadian Academy of Pathologists, International Society of Dermatopathology, International Sentinel Lymph Node Society, United Kingdom Clinical Society of Pathologists, Arthur Purdy Stout Society, and Armenian Canadian Association of Medical Professionals.  He has published over fifty papers in peer-reviewed journals and has presented at many meetings.  He is the current Chair of the Melanoma and Skin Oncology Site at Princess Margaret Hospital